The Cape Bruny Lighthouse was the third Lighthouse to be erected in Tasmania in 1838. 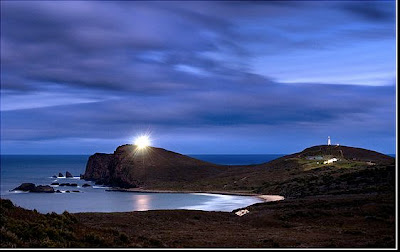 The Lighthouse was built by convict labour using locally quarried rock.
The original light source for the light tower consisted of fifteen lamps burning nearly a pint of oil per hour. Originally run on sperm whale oil the lamp eventually changed to colza oil a better quality oil. The quality of the oil was paramount as the better the oil the less consumables such as wicks & glass chimneys were used. The wicks & chimneys had to be imported from London, a very long journey indeed especially as all lighthouse provisions were brought across the ocean by ship to nearby jetty beach a small inlet several kilometres away, then brought on horse & Dre from there. 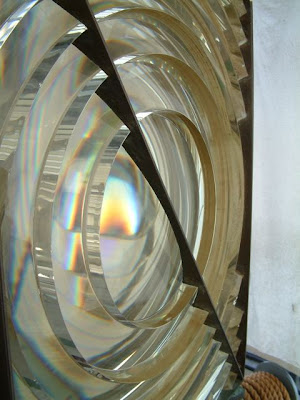 In 1903 the original Wilkins lantern was replaced by a Chance Brothers lantern. In 1912 & 1913 several upgrades were made to improve the lanterns efficiency. The cut glass lantern once housed the oil lamps which have since been replaced by electric light. The lantern is hand cut from the same high quality glass as crystal chandeliers. 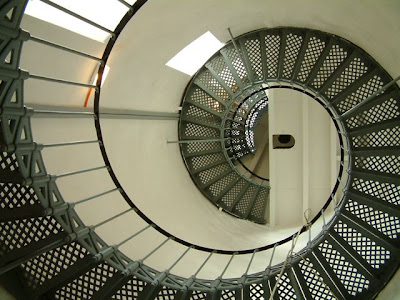 The original staircase was replaced in 1903 by this still sturdy cast iron spiral staircase.
The Cape Bruny Lighthouse once gave shelter & work to Australia's longest serving lighthouse keeper, Captain William Hawkins who served as Superintendent at Cape Bruny for 37 years & 232 days between 1877
& 1914. It must have been a solitary life as the first wireless telephone was installed in 1930.
The Cape Bruny Lighthouse is accessible by road & takes an hour to get to from the Barnes Bay ferry terminal & about half that time from Adventure Bay. The roads are bumpy in places but the Cape Bruny Lighthouse is worth a visit & I believe guided tours are available by appointment. http://www.brunyisland.net/
Posted by ilianthe at 5:06 PM